The ruins of Lady Kirk can be found around a mile south-west of Lady Village and a mile north-east of Kettletoft.

The church, with walls still standing to their full height, dates back to 1773 but may well include walls from an earlier church. A door at the west end, obscured by a porch added in 1902, has been identified dating back to the 1600s.

The fact that until its redundancy the church’s effects included a pre-reformation communion cup suggests that there could well have been a series of churches or chapels on this site, perhaps dating back to to the Viking era or beyond.
No physical evidence of this has been found, so it has to remain as speculation.

Today the interior doubles as an informal nature reserve, but most people come to Lady Kirk to look at one feature in particular. At the top of the steps that once gave access to the north gallery, the dressed stone balustrade carries a series of deep grooves known as the Devil’s Clawmarks.

These are rather spooky, despite the fact that it would take a fairly large being with at least six fingers or claws to have made the marks in question.

There was once upon a time a minister preaching in the Ladykirk.
Every Sunday he preached against sin, especially adultery.
And every Monday to Saturday, he himself enjoyed precisely those activities he preached against.
One night, as the minister was coming out of his mistress’s house and heading for home, the Devil himself stood there before him, and tried to grab him to take him to Hell.
But the minister was too quick for him: He ran for his life until he reached the sanctuary of the church, and shut the door on the Devil, who was left raging outside and clawing at the stonework.
And there you can see the marks of his six sharp claws to this very day.

A stunning sandy beach, almost 2km wide. Backaskaill bay is located on the southern side of Sanday and is accessed from 2 points. The first is from a track off the B9070 main road from Loth, next to the sign for Backaskaill Farmhouse and cottage. The second is from the road just before How farm of the B9068, the road into Kettletoft. Both have picnic benches and small parking areas for approximately four cars.

At low tide, the west end has some stunning rock formations, rock stacks and plenty of rock pools for hours of exploring. The east end leads you past the remains of an old church around Bea Ness, to Kettletoft and the pier. This makes a nice circular walk of around 4km, which takes around 1.5 hours at a very leisurely pace. 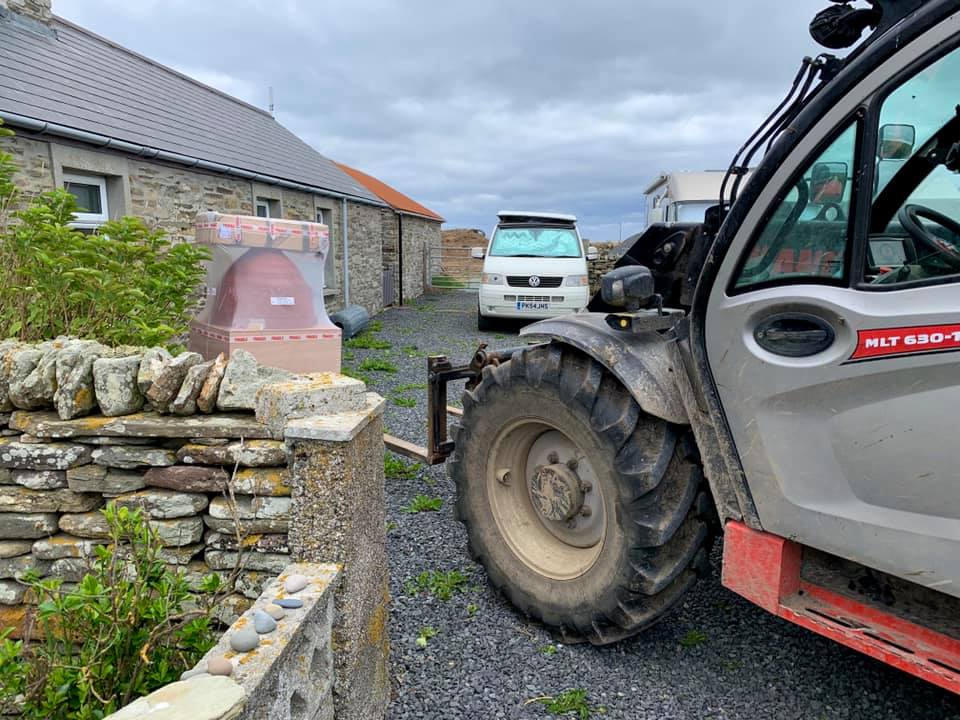 Today’s the day our Bushman Wood Fired Ovens pizza oven arrived, expertly delivered as always by Sinclair Haulage. Now we’ve just got to build a barn around it and get practising! We’ve gone for a Bushman Santorini to get the ball rolling, small but perfectly formed. We can always upgrade to a giant oven from Jay at Bushman Ovens if demand outstrips supply!

We’ve become a stockist of raw dog food from The Raw Factory. Their food is made in Falkirk, Scotland, in a brand new family owned factory. They source all their high quality ingredients locally, which we love. To get started, we will be stocking 12 “complete” flavours. Complete raw dog food contains 10% bone and 10% offal which are required to give your dog all the goodness they need to thrive on a raw diet. Our first delivery will be available from 25th July 2020, you can order online here.

“A balanced, raw diet has many benefits which include a healthier coat, cleaner teeth and breath, reduced stool volume and odour and better overall health.“

We have fed both our dogs on raw food for over two years. We have 2 Hungarian Vizslas, affectionately known as the ginger ninjas! Eden our two year old has been fed a raw diet all her life and is in amazing condition. Isla is seven and has been on a raw diet for over two years, we switched her to raw as her coat was starting to become dry and itchy. Since the change, this condition has gone completely and she is in amazing condition. Isla was a qualified air scent search dog for Lowland Rescue and attended over 60 searches assisting the emergency services to find missing vulnerable adults and children across the south east of the UK.

Here are a few pictures of Isla at work, fundraising at shows, climbing the 3 Peaks and representing Search & Rescue at Crufts in 2019.

Eden started her training as a tracking/trailing search dog looking for missing people too, she was part of the Search Dog Heroes project sponsored by The Peoples Postcode Lottery, but our move up to Orkney got in the way of our training. So to keep her brain working, I switched her to searching for narcotics as we can do that anywhere!

Here are a few pictures of Eden working on scent boxes, learning what she’s looking for, then searching vehicles for drugs! 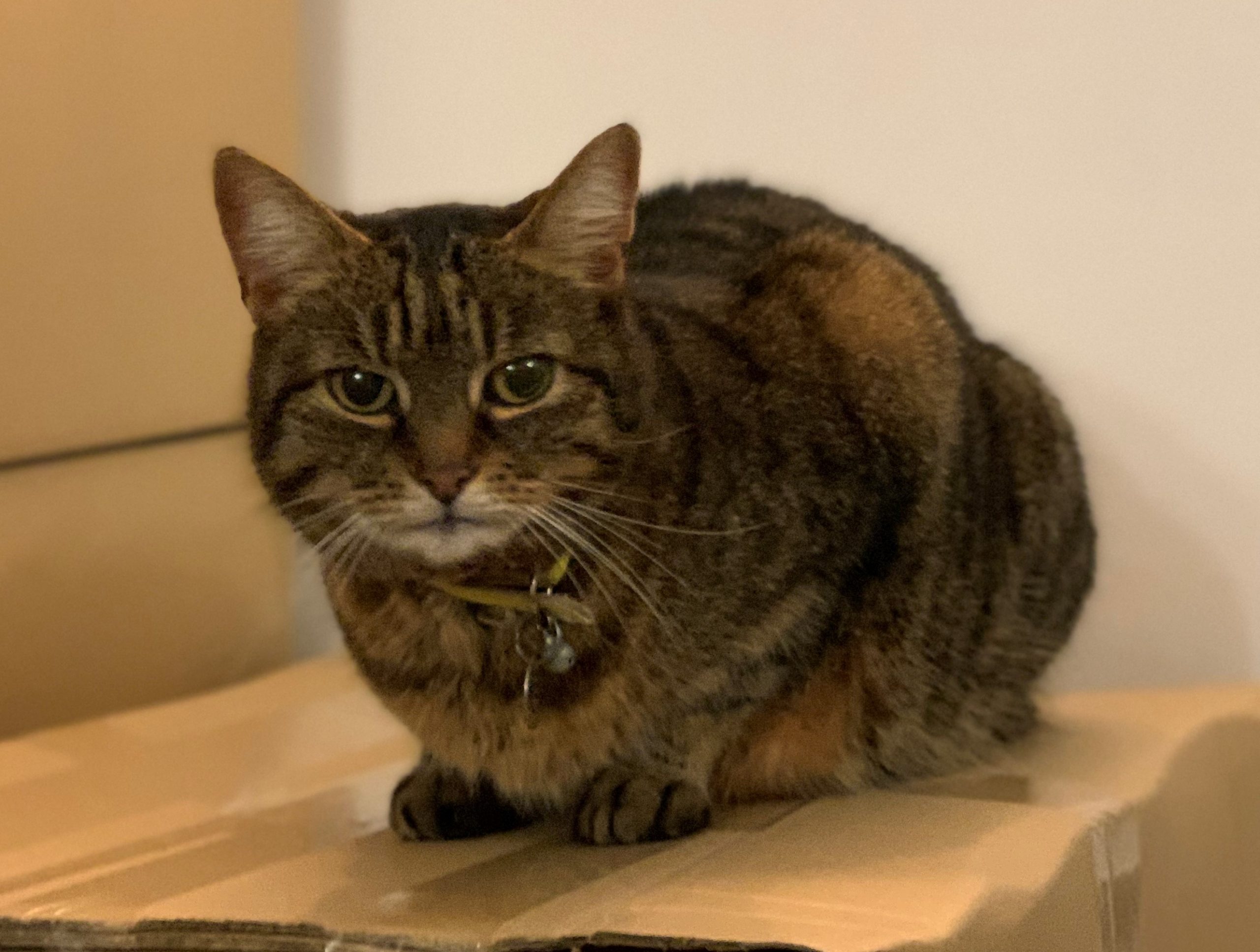 Day 3 – Tuesday 24th March
We are knackered, it takes a lot of concentration to drive a 6 tonne motorhome almost 750 miles in one trip, so today is for chilling! We unpacked the food we’d brought up with us and got the kitchen into some sort of shape! Mocha the cat was finally let out to explore inside the house, we’ll keep her in for 2 weeks so she has time to learn that this is her new home. The dogs have been here many times now and just wanted to go for a run around in their garden and check out all the holes they had dug last time! We set Clare’s workstation up ready for her return to work tomorrow & even unpacked a few things from the van & trailer that I delivered on Friday! 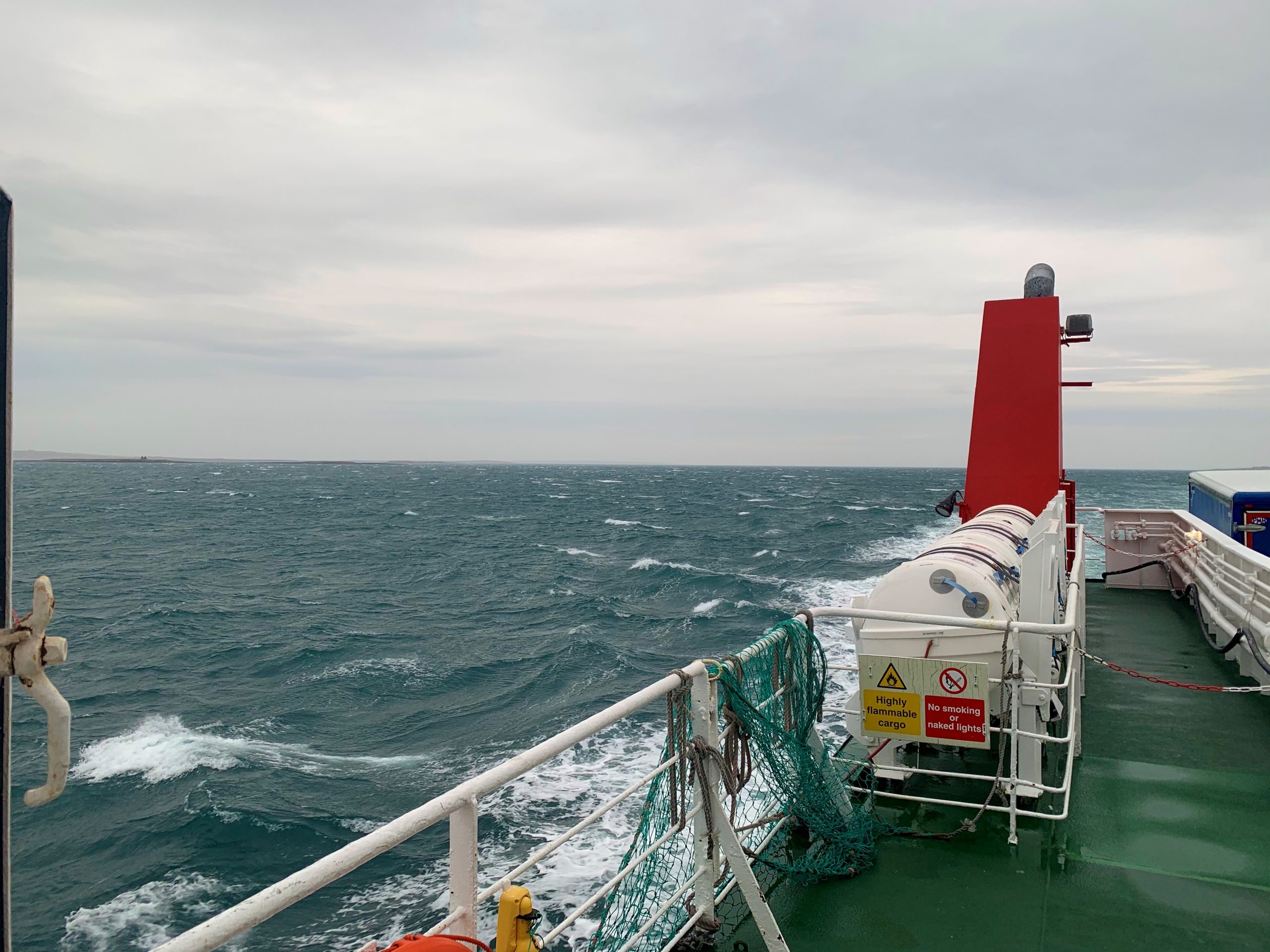 Day 2 – Monday 23rd March – Biggar to Sanday.
It was becoming clear a lockdown was imminent, so we set the alarm for 5am, had a quick breakfast and headed north. The roads were eerily quiet, we were making good progress, only stopping once off the beaten track for fuel. I was driving a 3m tall, 9m long champagne gold coloured motorhome, not the best vehicle to be in, especially when all I had read on Facebook the night before was locals blocking roads and causing hassle for people heading to the highlands to self-isolate in motorhomes away from the large towns and cities! All was well until the area around the Cromarty bridge on the A9, where numerous cars and vans started shouting and waving at me in a rather unfriendly way, it was starting to get a little scary. Whilst passing through Glospie, whilst stopped at a red traffic light, an old man with a walking stick shouted go home, you shouldn’t be here and spat at me! Things like this really do bring out the worst in people! We continued north and made it to Pentland Ferries at the Gills Bay terminal in time to catch the earlier lunch time ferry. Overnight in Scotland all ferry crossings were limited to Islanders only, so we had to show ID to prove our address and a letter from the solicitor to show we had sold our down south home. All this was done at a great distance from the staff who were all wearing gloves. Just over an hour later, we were in Orkney and I felt a huge sense of relief that my little family was safe. We drove the 16 miles to Kirkwall for the next ferry over to Sanday. Again we were asked for ID and proof of residency in Sanday before we were allowed to travel. The motorhome was on, but the car was 1st reserve so didn’t come over, so we quickly had to move the cat and a load of stuff from the car to the motorhome and we were off. We kept out of everyone’s way and found an empty passageway on the ferry for the 90 minute crossing. We’d made it, Sandhurst, Berkshire to Sanday, Orkney, 745 miles in 31 hours. We only had contact with 4 other people in that time and that was at a safe distance, so I’m happy that we haven’t passed anything on! We are now self-isolating for 14 days to protect the island community as there are no reported cases in Orkney. 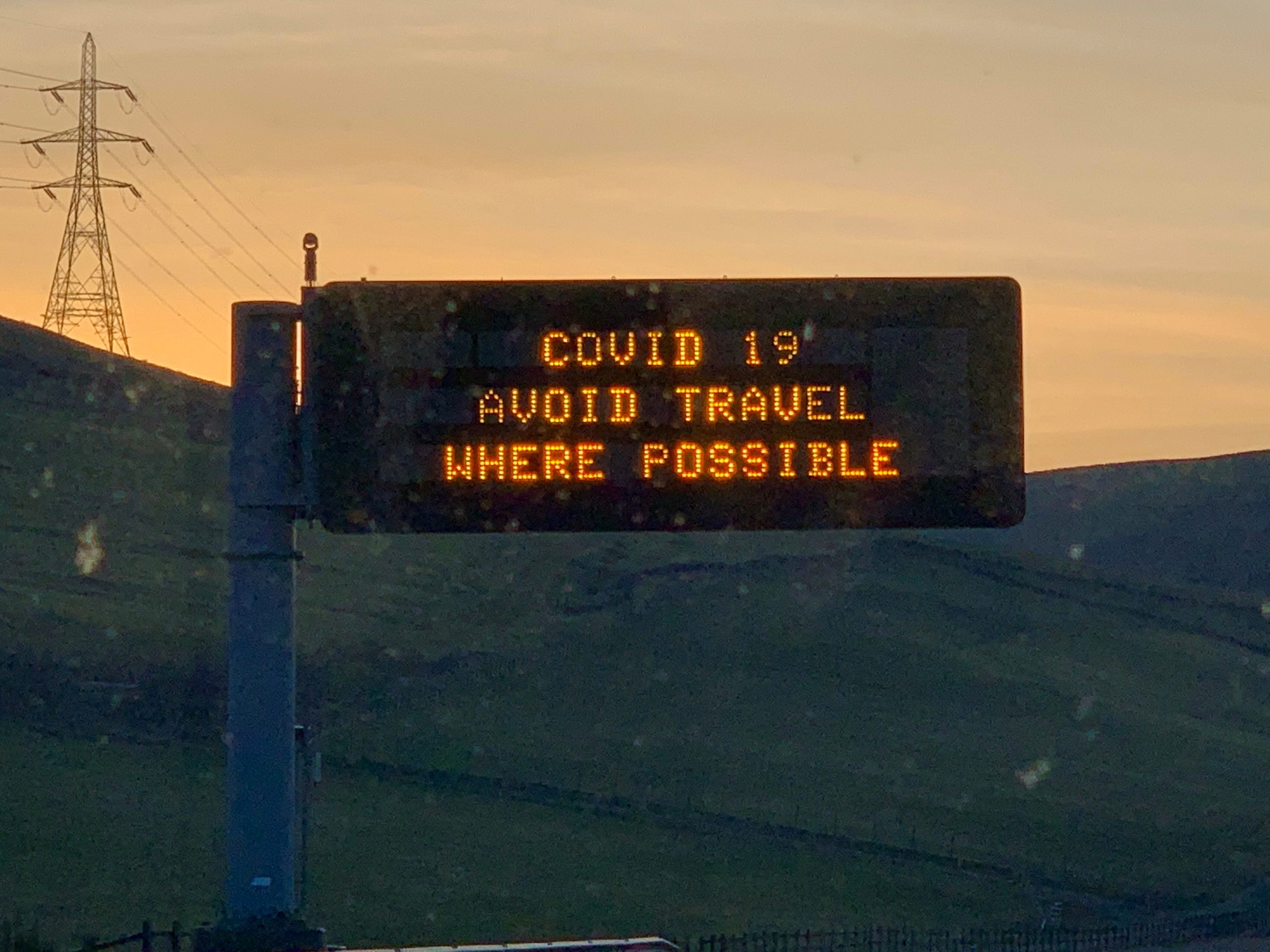 Day 1 – Sunday 22nd March – Sandhurst to Biggar.
I had the feeling a UK wide lockdown was coming, so decided to get a wriggle on and we finished the last of the house cleaning, packed the last bits and the animals in the car & motorhome, said our goodbyes and headed north to the Carmichael Estate in Biggar. Clare was driving the new car and I was in our not very conspicuous gold motorhome! We’ve stopped in Biggar many times before in the motorhome using our Brit Stops book and even for a Viz Whizz a few years ago! We arrived early evening after a long hassle-free drive, and had an early night, in preparation for Monday.